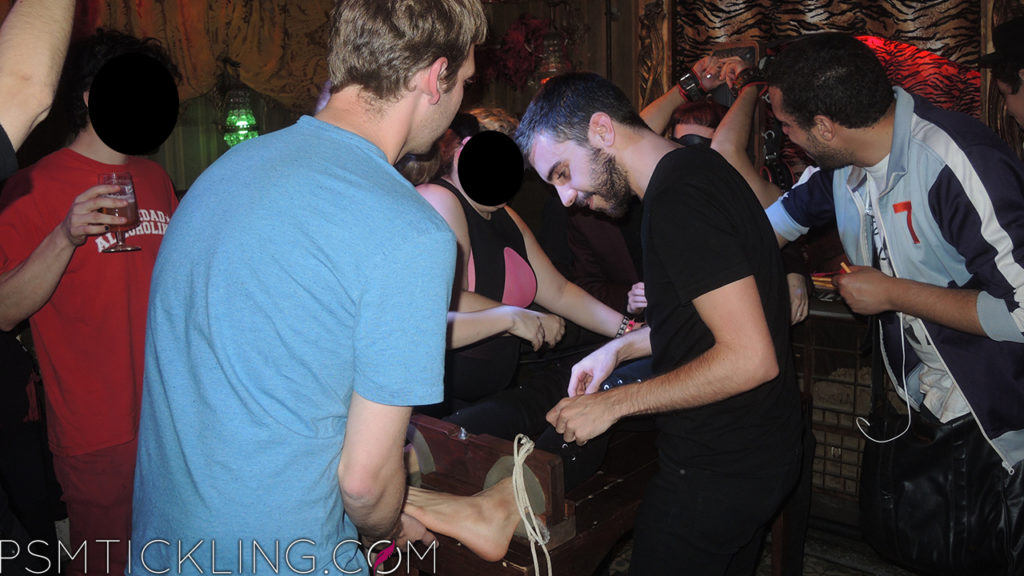 So of course the question in all of our fans’ minds is the same: how did it go?
We’re obviously referring to our first Spanish event, Night of the tickles. Quite a suggestive name for a crazy party!
You want to know what happened that night? We’ll break it down for you.
The setup was promising: a popular bar in the center of a very liberal city, a horrifying wooden torture chair, the whole audience as potential torturers or victims.
The first two hours proceeded pretty calmly, as usual: people were facing something they had never seen in their lives; plus, being sure that Barcelonans would have been much kinkier than Romans if given the chance, we decided not to have an official model with us to get the party started.
At the beginning, Miss Riot, our young, mad and hilarious leading lady, in her sexy low-cut, short black dress, went to each and every customer trying to convince her/him to get on the chair, presenting the show and flirting a little bit.
Then, one of our crew, Rafa, let us tie him up and tickle him: he was so embarrassed (LOL) but, still, ticklish enough to make it look like fun. His pits, sides and feet are sensitive even to the slight touch of a feather!
So, when we decided to play with the poor restrained guy – bare chested and barefoot – rubbing his soles with our hairbrushes to the beat of the music that was playing in the bar, that was it: the customers were laughing their heads off and found the game fantastic.
It didn’t take long before Lorente, a young Spanish bearded hunk, accepted to put his big masculine paws in our feet stock and have a good laugh.
Lorente’s friend, Yessi, a young goth, was sufficiently reassured by his buddy’s performance that he chose to be next, just in time to play our “math with tickling” game: he was presented a list of numbers from 1 to 7 associated to seven parts of his body (neck, armpits, ribs, sides, stomach, thighs and soles of the feet). We then blindfolded him and let two members of the audience pick two pieces of paper with numbers on them, from a bowl. We showed the chosen numbers without saying them aloud. After that, all customers were invited to go ballistic on his pits and ribs (the corresponding spots for the two numbers). The poor thing had one minute and three opportunities to remember and basically scream the numbers out loud between fits of laughter to make the tickling stop: when he failed, we told the audience they could tickle him anywhere they liked for one minute more.
“Aw” moment of the session: when the young lad shyly tried to protest and said “I don’t think this is just one minute.”
Next on, another youngster wanted to accept the challenge: cutest and softest and most boyish feet ever!
“Unfortunately” he won the first round of the game, and that earned him a wonderful t-shirt with the drawing of an emerging artist, but he failed round two, so we could literally drench his rounded toes and soles in massage oil and have fun with fingers and brushes.
Worth mentioning are the only girl to let us tickle her in the whole evening and even a drag queen who apparently improvised orgasmic groans to reply to our attempts at tickling her!
One sexy guy was so “disoriented” (let’s be nice) to ask us to remove the only item of clothing he was wearing: his underwear! That’s where things got totally out of control and half of the pub worked hard trying to tickle the boy’s cock and balls with every object they could think of.
Eventually, a very drunk Matteo, PSM’s boss, let us trap his bare feet and have a go at them. After having tickled all those people? Bad idea!
You can take a look at the gallery of the evening by clicking here.
The videos of the event will be out this month very soon!

2 replies on “Night of the tickles”